Climate and weather in the Algarve

The Algarve's climate is pleasant all year round. Even during the hottest season, fresh breezes blow from the Atlantic. The numerical values ​​of air and water temperature compare extremely favorably compared to other coastal regions. In addition, the Sierra de Monchique mountain range offers effective protection against bad weather fronts. The sun shines for over 3000 hours a year. This is certainly unique in Europe. Spring is one of the longest seasons in this region. The rain, which is usually longed for in December, lets the green sprout lushly at the beginning of January and before you know it, the entire surrounding natural landscape is in the most beautiful almond blossom at the end of January. Not to be missed, the orange gardens with their ripe curtains. The temperatures are mostly above 20 degrees during the day. During this time, rainy days are gratefully accepted, but as a rule they are very sparse.

It is the best time for hikers, those looking for relaxation and especially for golfers, as no frost is expected in this region. Enthusiasts and insensitive people are already swimming in the sea at this time. So spring in May and sometimes in June seamlessly merges into the no less long summer, which can be extended into November. The tangibly close, steep and bizarre ocher rock formations, grottos, romantic bays and fine sandy beaches and last but not least the clear and recognized clean Atlantic water are the epitome of the Portuguese summer. 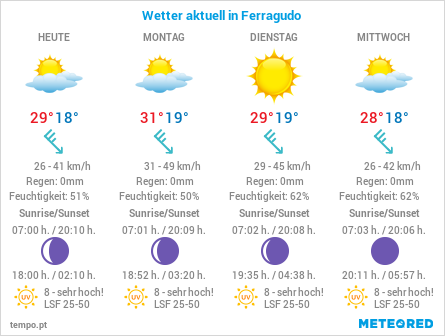